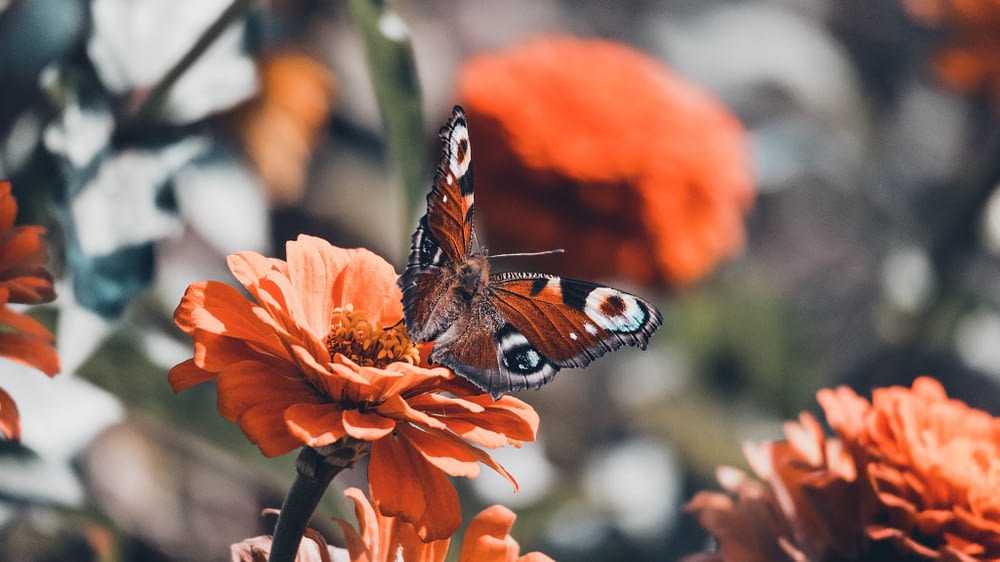 This year, it seemed like every day, we had new pops of color in the garden.  And the big surprise was falling in love with Zinnias. I was so excited to come out each morning to a new beautiful flower that lasted for weeks. Each flower had different stages of beauty.

This summer, I decided that I’d start sharing some of the many characters in our garden with all of you here on the blog.

This post contains affiliate links that I make a small commission on with no added fee to your purchase.

Native to Mexico, Zinnias are an easy flower to grow, and they don’t take much effort at all. This was my first year with them. I was absolutely stunned at how quickly and easily they went from seed to full flower that survived the crazy Maryland humidity and heat and cold mornings.

I was given a few different zinnia seeds this spring, and to be honest, I didn’t know anything about them; and this summer was going to be crazy because not only did we get hit with a crazy pandemic that made going to the garden center impossible, but we also were doing some major yard remodeling, and I didn’t have a lot of time to focus on the flowers

When do you start Zinnias?

When to sow outside:  1 to 2 weeks after your average last frost date. The ideal soil temperature for zinnia seed germination is 70°–80°F.

When to start inside: 4 to 6 weeks before your average last frost date. Transplant outdoors after the last frost. Zinnias do not benefit from being planted early; wait for warmer weather.

I started them in my garden in May in Maryland. I did start a few for my containers indoors in February, and those plants did VERY well.

The next time I do them, I think I’ll plan for planting a few indoors for places that I know for sure that I really want them.  I have a couple of new beds that I know I want some of the bright red pops of color, and then I’ll toss some seeds into my wildflower area and see what comes up there.

How do you start Zinnia seeds indoors?

We use a lightweight seed soil mix.  This is easier for the seeds to push through, and I know it’s sterile.  They are planted ¼” deep and lightly covered. It’s recommended that you plant two seeds per pot, thinning to the strongest plant once you have good healthy leaves. You don’t want your plants to be crowded and fight for nutrients.  I personally don’t like killing my plant babies, so I only plant one seed.  Sometimes they survive, and sometimes they don’t.

I like a seed starting soil with nutrients in the soil, so I don’t have to fertilize.

If you are going to start your Zinny babies in pots, make sure you have one with drainage holes, and start in small containers that you can easily remove the plants for their forever homes without disturbing their roots.

Paper Pots are an eco-friendly way to grow your seedlings.

What’s the best soil for Zinnias?

Zinnias do very well in well-drained soil.  You want to water regularly, but don’t let them get super wet and soggy. My Zins did very well in a sunny spot in my garden, which actually is a little dry.

Here’s what I learned about Zinnias the hard way:

Unfortunately, I let the sprinkler spray my Zins, and they got powdery mildew on the leaves.  Which I then had to treat all summer.  Once you get it, it’s tough to get rid of it.  Powdery mildew looks like the name, powdery spots on the leaves. You can’t wipe it off, and if you don’t take care of it, your plants can die.   You have to cut those parts off and throw them in the trash, not compost.  Diseased plants can’t be composted because it can infect all of your compost.

Milk was actually the best medicine for my plants!

I mixed up a spray bottle of ½ milk and ½ water and a little bit of dish soap and sprayed the leaves daily for a few weeks to fight off the infection.  I also use this for my roses to fight off aphids and Japanese beetles.

The last thing I learned was that you MUST cut the flowers!!!

I don’t like cutting my flowers because I like to see them out in my garden.  But Zins love to be used as cut flowers.  Cutting them stimulates them to grow new flowers and grow better.

I didn’t cut my zinnias enough, and some of my plants just didn’t flower as much as the ones that I cut.  They also were leafier and shorter than the ones that were cut.  Cutting also makes sure there is enough air circulation and stops them from producing seeds too early.  Cutting them before they bloom will give you the longest vase life.

What I have in mind for Zinnias for next year:

This summer, I had the Zins at the front entryway, and I planted these florescent purple zinnias and pink ones.  Problem: I had no clue what color they were going to be, and they didn’t really go well with the orange flame Zinnias and orange poppies that were already there…. But I forgot that I had planted it.  Ooops!

So going on for the next year,  I will take those hot pink and purple zinnias and plant them in another bed where I have lots of pinks and purple flowers like gladiolas and lavender.

I also got a few new varieties of zinnia seeds from Botanical Interests, my seed supplier.  And I am very excited because they had some great shades and blends.  I loved the Peppermint Stick Zinnias this summer in some of my pots on the deck.  They had cute little stripes and speckles.

Do you love Zinnias? We want to see your photos!  Tag us on Instagram and show us your buds!

1 thought on “Zinnia: The Star Of My Garden & Free Printable”