previousTaking Back Joy – Lessons after a Panic Attack
next5 Things You Must See and Do In Chicago!

This weekend we headed out to Portland, Oregon. Hubby and I celebrated our anniversary, and this was the best thing I could think of. Food, a get-away, and… geeking out at Heroes and Villains Fest! 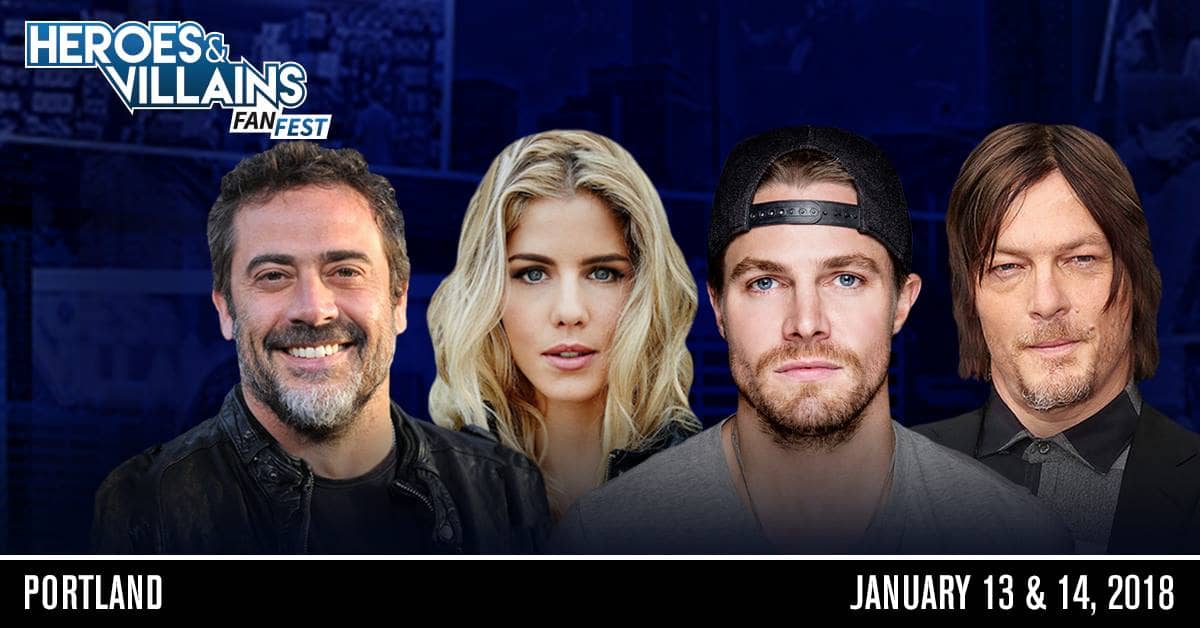 This weekend the weather was unusually warm for January and perfect for getting out and walking around the city. And boy did we do some walking!

I’ve been to Portland a few times, each time I feel like it is a different town. While from a distance Portland sounds very hippie, green, maybe even Earthy… up close it is really pretty much like any other city. Yet I was surprised to find that Portland isn’t super walkable. I mean there are so many significant little trendy areas to visit, but they are quite the distance from each other, and there aren’t convenient public transit options. So we found ourselves walking around, then going back and getting our car, then driving to the next place and searching for a pay-to-park space and starting again.

This was a FUN event. I am a huge fan of the TV show Arrow, and I have to admit that I follow Stephen Amell and Emily Bett Rickards on Social Media. So when I had the chance to get tickets to this fan fest event, I was on it.

This fest is kinda new. They do a traveling fan event in several areas, this was only the 2nd time in Portland. So it is small in comparison to other fan events like ComicCon and the Emerald City Comicon that we’ve gone to in Seattle.

I wish that my photos would have come out a little better. So a special shout out to HVFF for taking some great shots and video!

Like Heroes and Villains, this event had some pretty big Pros and Cons.

The Pros are that this event was merged with the Walker Stalker fan event, so if you are a fan of The Walking Dead, you had the chance to get in and see some of the stars from that show. In fact, most of the autographs and photo ops were Walking Dead actors.
The hall where the event was held was pretty small, so if you are short on time, you could see everything in this fan event in about 2 hours.

The Headline Panels were excellent, and even though you had to stand in line each time to see the next panel, there were plenty of seats, and it wasn’t hard to be able to see your favorite actor.

The Cons are that since this is a new event in Portland they just were not prepared for the number of people coming in. We stood in line, that wrapped around the entire Portland Convention center for almost 2 hours before we could even get in the door. The next day they seemed to be better, pulling people out and sending them in much faster.

Also, the event is small. So they just don’t have the number of vendors that other events draw in. I really wanted to get an Arrow t-shirt, and they didn’t have anything like that. There were a couple of artists, some sticker people, and oddly more crochet and craft booths than I would have expected. So I planned on coming to spend some money and left without purchasing anything.

As I said, we are fans of the show Arrow. Both days I sat in happy fangirl awe as my favorites took the stage.

The first day, Stephen was there alone, and I sat wishing that at least Emily would come join him. And to everyone’s delight, she hid in the side area at one point and heckled him as he answered fan questions. He was fabulous, it was really so cool to sit and listen to his thoughts and ideas about the show, about life, and answer fan questions… mostly from little girls.

The second day, Emily and David took the stage. Together they were non-stop laughs. This cast seems to have great chemistry. It was so much fun to watch them. At one point there was a contest between Emily and David on push-ups. That girl is a beast!

To everyone’s surprise and delight, Stephan hid in the crowd and managed to get into the question line to ask Emily and David a question. Then took the stage to join them for the rest of the panel. Together they are an incredible team and appear to be great friends.

The slogan to Keep Portland Weird seems to really have settled in. Portland is a strange down with a slightly off-center vibe.

What the heck is this thing and WHY??

It isn’t entirely an art town, not really strong as a music venue, and though we found the food to be top notch, it doesn’t have its own strong flavor. Perhaps it’s best as a brunch town since there are so many brunch options on the weekend to explore.

The homeless population is sad and even a bit scary. Several times as we were walking along there were violent outbursts, glass bottles being thrown at women, and an uneasy feeling that left me more concerned about walking this city solo than just about any other city I’ve explored.

As for the weirdness, sometimes it felt just a bit overdone. It’s like they are trying to be unique, but somehow took too many drugs and just wandered off.
Finding the joy in Portland

That being said, there are some lovely areas of Portland that we definitely enjoyed. Small boutiques, tea shops, and even an impressive hat shop that had hats of unusual sizes where we found some cool hats for my hubby to take home.

We had a great visit. Michael and I walked out in the windy sun to see the river. We brunched, lunched, and had tapas in one of the best tapas places I have ever been to. (More on our food experiences to come later this week!)

The Hotel in Portland

Our hotel was decent. The AC hotel is right downtown and closet to food, shopping, and the river walk. The room was a nice size and even though I am not a huge fan of glass sliding doors in the bathroom ( I like some privacy in the loo!) the room was modern and nice.

I’m almost thankful that they didn’t offer complimentary breakfasts since it got us to get out and try another brunch spot that we might have missed if we had stayed in the hotel for breakfast. Mother’s around the corner is usually packed, and we heard that they had reservations booked for weeks in advance, but since we were so close, we stopped in and were thrilled to be seated relatively quickly.

The mini-vacay was well worth it. We had a fun get-away together, and HVFF was worth the drive in my opinion.

Check back with us later when I’ll have my top picks on dining options in Portland, as well as what to do when in Portland.