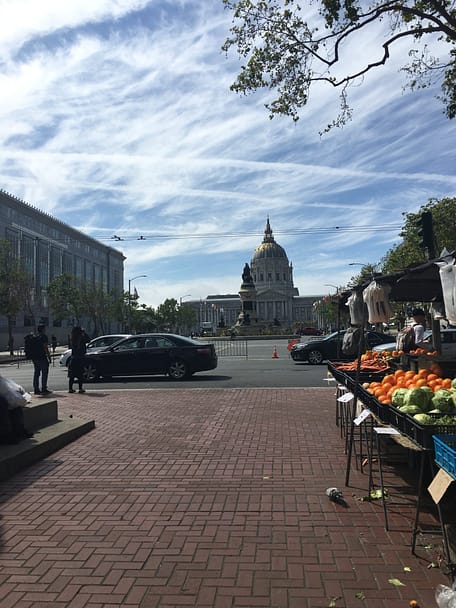 Before I head out on a new travel adventure, I like to look through the travel guides to see what recommendations I should make sure are on my list of MUST DO's.  They are usually a great way to make sure you can fill your itinerary with local highlights.

I love being a tourist and seeing the treasures of a town as well as an explorer and discovering local favorites off the travel maps.

However this weekend I had an experience that was certainly NOT on mentioned on the travel sites.  San Francisco, the beautiful city on the bay has been one of the top cities on my travel list for years.  I love looking at the photos of the architecture, the bridges, and the reviews of favored restaurants.

First let me say, the city's architecture… the bones and style of the buildings are so beautiful and creative. However, darkening the landscape is the epidemic of homelessness and gangs that wander aimlessly through the streets. Something should be done. They shouldn't be forgotten.

I don't even know how to say any of this in a way that doesn't just sound wrong.  So I will just say why I will never visit San Francisco again, say it as I saw it.

I wanted very much to see the famed trolley cars and check out the Fisherman's Warf. Traveling into the city, my friends and I parked at their office and we planned to take the public transit down into the capital area and walk to the shopping district and to see the Trolley cars.  My friend, Nic, asked me a few times if I was sure that I would be alright with taking the subway or if I would rather take and Uber car.  I have traveled around the world, I've taken public transit most places when we travel.  I don't mind standing in huddled railcars in order to get to my destination, so I found it odd that he would ask me a few times out of concern that I wasn't picking up on.

We walked towards the underground subway terminal and that is what I realized what he was warning about and why I feel the need to warn other travelers as well.  The homeless camp that surrounds the entrance of the subways was not only graphically disgusting but potentially dangerous.  From the vile stench of human feces and running trail of urine, to the drug exchanges and threats made as we walked through, I was truly shaken.

I don't claim to be a jaded tough woman. I am a mother of 5. I love babies and puppies.  I love traveling and exploring.  But I am not weak either. I knew that like many large cities, we are seeing a lot of homelessness and often my husband and I do what we can do help make the lives of those people hard on their luck have a better day.

The level of disintegration of self-respect, the waste of human lives that are so pumped up full of drugs that they care barely hold their heads up was awful. What I saw made me sad.  My stomach churned at the stench of body odor and human waste.

We took the subway down to the capital building. The police presence did seem to push back some of the more threatening scenes. However as we kept walking to towards the shopping district to catch the trolley cars, the pushback of the city's citizens became more apparent.

I have been to so many large cities around the world, each of them has a very different feel.  Each town has it's one vibe and song.  Chicago is fast and excited, Seattle is laid back, London is traditional and elegant. But sadly, San Francisco's song is muted by the desperate cries and begging for change.

I didn't make it to the Warf or even feel like waiting in the long lines for the trolley cars.  Instead, we called for a Lyft driver who came quickly and drove us back to our car. I was overwhelmed with all of it, sad and disappointed in what I saw.  The travel guides didn't say anything about this.

I walked next to a homeless man, he was mumbling to himself. His words are still in my ear. “I am invisible. You can't see me,  I am invisible.”

No Sir, you aren't invisible… you are remembered, thought about, and I wish you well.