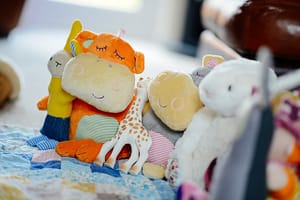 I loved passing by her bedroom in the mornings, she was always immersed in a magical world of her own creating. Her friends would be ready for tea, packed for a vacation, or settled down for a story time, just where she placed them. Silly bear, quacking duck, and baby Ben the weird baby doll that had been given to her by the neighbor child across the street, all were ready each morning for Rosie’s morning games.

This morning her Daddy and I stood there quietly listening to her happily playing. “Yes, I know. But I am always a good girl.” She said as she reached over and poured imaginary tea from her plump pink plastic teapot into tiny cups set up for her and her guest. The usual suspects of stuffed playmates hadn’t yet joined, cast away over in the corner with the trains and toys. It was just her and an empty seat, but she didn’t seem to mind. “Does Daddy know?” she asked curiously as she nibbled on a tasty plastic cookie and looked at her guest across from her. “My Mommy is sad.”

Puzzled, my husband and I looked at each other as we wondered what she was talking about. Our ears straining to hear her baby voice. Happily serving tea and cookies, Rosie carried on with her morning party. “I want you to stay… a long long time, Gamma “

She carried on her conversation. Sometimes she nodded and looked over at her bed. Both of us wishing we could see what she was looking at. But her words were still stinging my ears. Gamma.. Gamma..

“Zay-dee, you should come and eat something. I made breakfast. Come eat. “ She said sharply. Even at 2 and a half, Rosie was a little mother. At pre-school she always had a baby doll on her hip, making food in the classroom miniature kitchen, and a table full of boys being told not to get up until they have eaten their food. Even then the boys took orders from her without question and loved every minute of it.

Her dark eyes followed another guest around the table and she moved a Dora the “Exploder” plate to the empty place. “Bubby isn’t coming today. But my new Gamma is going to stay for the party” she explained as she poured more tea.

Gamma.. did she mean Grandma?

At two and a half, Rosie had a large vocabulary but her words were still often baby cute. We still laugh at the popular cartoon character Dora the Explorer being called regularly Dora the “Exploder” which always sent her older brothers into fits of laughter at the idea of the explosive Latina child wandering about. “What’s in that backpack?” they would ask and laughter would erupt again at the long list of explosive items that could be packed into that talking purple pack.

But Rosie wasn’t done with her party. Soon she was introducing Gamma to her Zaydie and talking about their fun parties and how Zadie didn’t like tea, only coffee.

Our eyes went wide as my husband and I both looked at each other and shook our heads. This wasn’t right, our little girl was using names for people we hadn’t used for her living grandparents. Those were special names we had for our own grandparents, all who had passed on. More recently and painfully the day before my dear Grandma had died peacefully several states away. Our daughter hadn’t had the chance to meet her since she had been so small and my “Gram” was in a home for the elderly.

Rosie’s peachy baby face was delighted as she laughed and carried on her tea time with her family, but for us it was hard to hold back our tears. I wanted so much to join her and my Gram for one more tea party. My husband and I just stood there watching for a few minutes as she played and had a sweet innocent morning with those angels who love her.

We had always wanted her to know them, they were so important to our lives as children.

It wasn’t long before our little girl noticed us standing there and politely went to close the door to her room for her own privacy. But not before she hugged us both tight and told us she loved us so much. In that moment we knew she was having a special time with those who would always watch over her. Yet, we were just not invited.

There have been moments when I have questioned the After-life and the validity of Angels or Spirits. Even though through the years I have had reasons to fully believe. This was one of those amazing moments. When we asked Rosie about who she was talking to she matter-of-factly told us she had a tea party with my Grandmother and Daddy’s Zaydie ( a Jewish name for Grandfather ) and then just as quickly moved on to something else to talk about. However we were left with wondering how we could be invited to the next tea party.