25 years ago I became a teen mother.  This was not the life I expected, planned for all through my childhood, or thought would make my family proud.  I was 17 years old, no boyfriend, no baby skills, and was facing a life where people looked at me like I should be ashamed of myself because I had “made a mistake” and gotten MYSELF pregnant.

This is my teen pregnancy story. 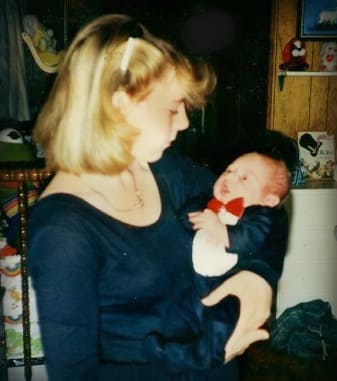 Teenagers are complicated. No matter how average the teen, they are ALL complicated. That is because of the very natural act of separation that comes as our children reach puberty.  We really don’t want to know what they are doing behind closed doors.  We see them start to branch off away from us, and for the first time in 12 years we start to feel a little lighter, we as parents have more freedom, and it’s an exciting place for us to step out of the house without needing to have our children monitored at all times so they don’t take markers to the walls or try to bathe the dog with our expensive shampoo that promises to wash the gray right out of our hair.  All of our years of training is about to give us the afternoon off.  But, this also is when our teens leap head first into their own personal lives and life suddenly isn’t about Saturday morning cartoons, slumber parties, or even pleasing our parents.

I was no different.  I was quiet, moody, and often very distant. My home life was unpredictable and I preferred the simplicity of school.  I made plans to graduate, join the military, attend college after serving, have a career, and live peacefully… alone, possibly with a cat.

At that point in my life I had been burned badly by other people.  Relationships were painful.  I viewed families as biological, not emotional.  I was ready to leave all of that behind and get on with the rest of my life.

At 15 I thought I was making worthy life choices.   I got respectable grades, held a part time job, didn’t drink or do drugs.  I was self-motivated to get a good education so that I could have a better chance to get out of the small town that didn’t hold many chances for me.  Now, I look back and see that I needed human connections.  I needed friends, healthy relationships, and good role models.  But those weren’t something I knew how to achieve. I was too reclusive and when I needed help there wasn’t anyone to hear me.

All through high school I had an on and off again relationship with a boy who I genuinely cared about.  When it was on we made promises to be together forever. We were fun, forgiving, and honestly cared about each other. He understood me, didn’t care that I was quiet, he made me a part of his group of friends.  He didn’t mind my lack of intimacy, but I knew that he would seeking it from other girls. I’d be heartbroken for a few days and then settle back into a routine of school, homework, sleep, repeat.  I knew it wouldn’t be long before we would be back on again.

The summer after I turned 16 is when everything changed. My off and on again boyfriend  had met a girl who was willing to have sex with him, run away with him, and just like that he was gone. Things became more stressful in my living situation. I had become more introverted, depressed at times, and struggled even more to connect with other people.  I turned to writing as an outlet for my feelings.  But I lacked comfort and safety in relationships. This was my fatal error.

I began to make some judgments based out of fear.  When I look back at all that happened in those few months I feel sorry for that 16 year old girl, I want to hug her close and tell her that it would be okay.  I want to tell her that she didn’t make a mistake, she didn’t ruin her life, and nobody hated her.

By the time that I climbed out of my well of depression, tried to start fighting my way back on track, I was pregnant and had no idea. I’d been sick, but didn’t really know for how long. I stopped going to school, stopped going outside, I slept 20 hours at a time.  A friend of mine came over one day to see why he hadn’t seen me in weeks. He said that the rumor was that I had Mono or moved away.  I didn’t know I was pregnant because I hadn’t known anyone pregnant. After his visit I took the test. Then I cried for a week. I thought my life was over and I was the biggest failure.

There was the Librarian at my school who was known to take a van full of girls to the abortion clinic 45 miles away. She wouldn’t tell the parents and would help the girls for a fee. She had taken a few girls I had known, made their “mistake” go away. One girl I knew had gone twice already.

I went to school, skipped all of my classes and headed right for the library.  I sat there day after day watching the girls come in and go to her office.  I located a book on teen pregnancy on the shelf and actually stole the book so I didn’t have to check it out. (I still have the book.)

In spite of having a problem with human connections, having a future planned out, and knowing I had options, I could not force myself to walk into her office.

However once my pregnancy was confirmed, my mother was told, I was driven to the Planned Parenthood to “solve my problem” and told to move on with my life. At the appointment, by mistake or maybe not, the nurse was told to give me an ultrasound to confirm the size of my baby for the abortion. She was called out and left the monitor on, the blurry image of a tiny human burned into my brain.  I saw him, in that moment I knew I couldn't ever harm him.

I had my son a few months later. I struggled, I had to work harder with less sleep, but I managed to finish high school and go to college.  My life didn’t end.  I didn’t end up on drugs, in a gang, and neither did my son.

I didn’t “make a mistake” and I hate it when I hear people blame girls for getting pregnant.  Even though 25 years later, I still feel the pangs of shame placed on me by the hateful glares of adults who should have known better and I still struggle when people ask how old my children are and say how young I look to have grown up children. I am NOT ashamed of the road that I took, a road that held more bumps and was just as rewarding as any I could have dreamed of.

I can’t imagine the life I could have had without the joy that being a mother has brought me.  I have had the best life.  Because my son showed me how to love and be loved, I was able to see myself as someone worth fighting for. I learned how to have a healthy relationship not only with another person, but how to see my life from a different point of view.

Being a pregnant teen was hard.  At times I was so depressed and alone that I thought about ending it all. Sometimes I look at the way things were in my life back then and I feel like if I hadn’t chose to have my child, I might have been another statistic and another teen suicide.

I want to tell those young girls out there who are looking at their lives and thinking it might be over that you do have hope and things do get better. It is hard, and sometimes it seems like you are drowning.  Nobody will be calling you to join their reality TV show.  You will probably miss out on a few things your peers will be doing. But you will make it through, you will make it better, and nobody wants that to happen more than your baby.

I know how scary it is to face this future and not know what will happen. It's like that for everyone. But if you need someone to talk to.  Please message me.