previousKindred connections
nextA Word To Pregnant Teens – You Will Be Okay 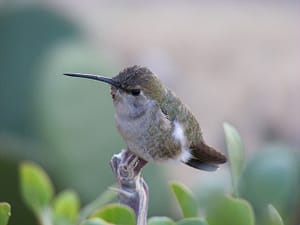 She loved hummingbirds. We always had feeders filled with sugar water tinted ruby red for her little friends.  My Gram would point them out, knew them all by their colors and personalities. I always loved the blue and green ones the best.

Sitting on the front porch in our rocking chairs, she’d sip her iced tea and watch the little guys come buzzing up to the feeders. She had two seats out there, one for her and one for me.

They always made her smile and I loved watching her.  Her soft blue eyes would light up as they came close and paused to take a look at her, as if in thanks for their meal. I loved watching the care she took to make their nectar on Sunday afternoons.  As she poured the juice into the feeders, I always wished I could drink it like Kool Aid. Secretly I once tried a drip from the funnel. I didn't die.

Petunias, bright red and purple ones were always planted out front where her little hummers could find them and she could enjoy their delight.  They would gather on the railing. If I sat very still I could watch as they perched there, their tiny wings at rest.

I learned to be very quiet and still as I watched them.  I wanted them to like me.  They were magical, like fairies. She taught me to see them each as special little beings, with unique personalities, and to value what made them different.

I was sad in the winter, missing them.  And for a while after she died, I felt like it was winter for a very long time.  Right after she passed, I wanted to see them. I wanted to be reminded that she was close.  But they were beyond my reach. It was as if when she left, they flew to Heaven to color her world with wings like flowers.  But my world without her was bland, and gray.

I struggled trying to find my way without her.  Even though I was all grown up, married and had children of my own.  I still felt like she colored my world with her sweetness. I rejected for a while the things that reminded me of her and how hard it was to be without her. I couldn’t look at her picture or even hummingbird trinkets without feeling the ache in my chest where the pain of grief burned.

Slowly as the waves of sadness started to calm and the heavy clouds of grief burned off, I started to grow my garden again, a few plants at a time. But I did not feed the hummingbirds.  They were on their own, just like I felt I had been after her death.

But still they came, tiny ones. Little black and yellow ones, pretending to be bumblebees, blue ones hiding in the flowers. One even became a bit of a pest, light brown and very small, he would come and fly around my hair as I picked at the potted plants on the deck. I chose to ignore him and his friends. Perhaps still angry at feeling abandoned, I would not give them the ruby red nectar in glass jars or my love.

It’s been a little over 10 years since she called me and said that she was ready to go meet my Pop. He’d been waiting for her for “far too long” and she was thinking that it was time for her to go. She was beautiful when the nurse took her out to the garden, her hair done and nails painted as she had requested.  I wasn’t ready to let her leave, but she knew I would never be.  I’d keep asking for one more day. When the nurse took her out, I know my Pop was there waiting to get her and take her home. She passed peacefully and sweetly as the smell of flowers drifted through the garden.  I’d like to think the hummers were there with her too, sitting still with their wings at rest as she too found peace.

My garden is full, bright colored flowers of every color and size grow between the summer squash and sweet peas.  On the porch are two rocking chairs and a hummingbird feeder with ruby red nectar always full for the hummingbirds that gather.  There are many that do.

My office has a large wide window that overlooks the feeder. When the window is open I can hear the constant buzz of the hummers as they flit to the window, peek in, and then go to rest on the railing of the porch. I know their names, the color of their wings, and their personalities.  And sometimes I go out and sit with my iced tea and watch them as the little brown one tries to keep the orange and yellow one from getting to his treasure.

My front porch didn’t feel right until I hung the feeder and planted the pots with flowers. I wish I had her old rockers, but I have two of my own. Two seats… one for me and one for her.