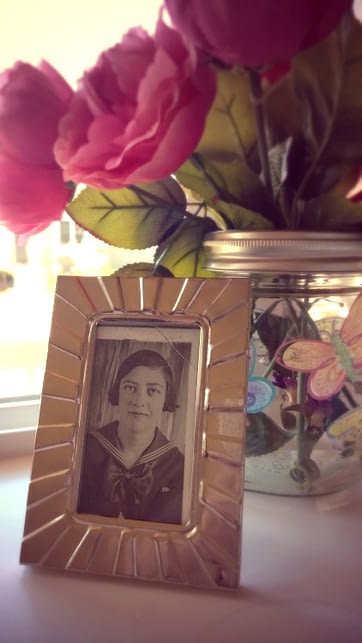 When I was little my best friend was old. Not just older, she was OLD. In fact she was my best friend until I was an adult and the whole time I knew her she was old. But not old and boring, she was far from that. I mean she was from a different place in time old. I loved her so much that I adopted being old for myself. We do that you know, adopt things from other people that we like. We become parts them and they become parts of us. I was the oldest kid on the playground, and I didn’t mind at all.

When I was 5, the right age for playing outside and riding bikes with friends, she was 68. We rode bikes together. I rode my tricycle down the street as fast as my skinny little legs would take me and sometimes she would walk beside me or get on her own tricycle, the ones for kids who are old and need to put small barking dogs in the basket. We would ride as far as we could go, the block was a very exciting place. After a small break to talk about life and the values of going to the bathroom before a long journey, we would return back to the house.

She didn’t have to be my friend, but she was. She was my only friend for most of my childhood. I considered sometimes that the reason that I didn’t have other child friends was because I was old, like my Gram. She was my great-grandmother. Being old meant that you saw things differently, you didn’t pick your nose in public, and you are too old for running. She never ran. Well, except for that time when the dog was after her favorite goose… she ran then, sort of. She ran and kicked at that dog, the insulted goose just fine once his bodyguard had arrived with the dreaded broomstick. I hated that mean bossy goose.

I wanted to be just like her. When she rocked in her chair, I sat beside her and rocked too. When she got ready for bed, took out her teeth, and washed her face. I stood beside her watching and trying to do the same. She was beautiful, pale blue eyes, soft wrinkled skin, and light blue-grey hair. When we sat out on the front porch sipping sweet tea, her right hand shook slightly making the ice in the glass clink like little chimes in the wind. Her shake the result of a stroke or tremors on her right side. My shaking glass the musical accompaniment to hers. It’s a wonder that I didn’t learn to write with the same old fashion loops and curls as she had that also looked as if everything she wrote was done so on a train.

She didn’t seem to mind being alone, raising a small child. Though now as an adult I wonder how terribly lonely it must have been once I drifted off to sleep at night. Perhaps this was why most often I slept curled up next to her in her big bed. I loved her bed, the comforter was old, the furniture was old, the room even smelled old… comforting. The smell of Oil of Olay still brings me happy thoughts and memories of nightly rituals, while at the same time making me very sleepy.

When you grow up with someone who is old, you have different ways of doing things. She was gentle and kind, but also knew who to make sure 7 year olds understood who was boss. “Cutting a switch” was something to be feared, even though I never felt its wrath upon my backside. Canning peaches with your cousins in the summer was some of the most fun I can remember, getting fuzz up your nose and eating as many peaches as were going in the bowl. Canning, sewing, gardening was something you did, it was just how things were done. Just like reading the bible, visiting the dead people at the cemetery on Declaration Day, and learning how to crochet, some things were just the way life was supposed to be.

I learned to “Bless their Hearts” when people were being stupid and that Johnny Cash would always be better than Elvis Presley, but Elvis was also from Tennessee and therefore he was alright. I learned how to milk cows, snap peas, and sometimes you didn’t want to know where the meat came from. She taught me how to make African Violets bloom all year and how it’ usually better to keep your mouth shut and let others think you are stupid rather than opening it and proving it. And a real lady never curses, except for that one time when I was being a bratty child and refused to come down the stairs into the basement when the tornado warning was going off and she grabbed my arm and pulled me down… calling me a “Little Shit” as she did. The first and only time she ever lost her temper with me. I completely deserved it.

I never begrudged her for being old. I suppose that because she was always old that it never mattered. I didn’t seem to care that the kids my age didn’t like me much. I had her and she had me. The girls were mean anyways, so mean that I couldn’t talk about what they did to me at school. I didn’t talk about a lot of things that happened at the hands of others, better off that way I thought. I didn’t want to upset her, and if she was happy then I was as well. At least for her I would pretend to be.

She did her best to keep me safe. We hid behind the door of her room, under the blanket. Her cold hands would pull me close. Sometimes we would share some of her secret stash of 3 Musketeer bars hidden in her nightstand drawer. Chocolate always made a bad day better, or at least distracted you from the pain of it.

As I aged, I became more aware of the real world. There were fewer places to hide from it. She couldn’t keep me from hearing it when it was directed at me. She couldn’t stop it any longer and I couldn’t do anything but stand there in tears as she told me that she had to leave and I needed to stay, without her. She had to go for her own safety, because she had no other choice, and because she was too old.

I begged with every part of my soul for her not to go, for her to take me with her, not to leave. But she did and she took that last drop of my youth with her. Overnight I embraced being alone, being grown-up, being sick and damned tired of this shit. If I wanted to survive I needed to let go of being old. I needed to realize that the only person that won’t let you down would be yourself, everyone else would drag you to hell. There would be no more safe rooms with comforting smells, no more lazy days of fireflies in mason jars, nothing would be the same.

For a long time I was angry. I carried it around with me because I didn't know how to let it go. But she didn't hold it against me, not ever. When I would call she would never bring it up. She just loved me. She never asked me to be anything I wasn't.

Over 25 years have gone by since then, she passed away a little over 10 years ago. We made peace with her leaving, I understood why and supported her in doing it. In the end I sent her chocolates to the nursing home, saw her once as I was moving across country with my own children. She was tiny and frail, and very very old. But before she went away, she would call me often and I would call her just as much. She was clearer than ever for a while. We talked about our lives, our memories, and about growing old and knowing when it’s almost time. We never talked about sad things, angry things, we just pretended they didn’t exist.

On the day she died she asked for her hair to be done up nice, put on a nice outfit, and asked the young nurse to take her outside into the garden for some sunshine. I couldn’t ask for a better way for her to go. Gentle, beautiful, on her terms.

Some say I look a lot like my Gram. The way I hold my mouth, the way I stand, the way I shake my tea. I think it is that little bit of old still lingering in me.