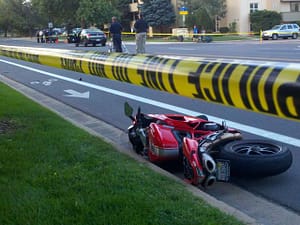 The Boulder County Coroner's Office today identified the motorcyclist killed in a collision with an SUV on 30th Street last week as Lance Gurney, 40.

At 4:53 p.m. Aug. 21, a woman driving a 2000 Lexus SUV told police she was pulling out of a private parking lot driveway and attempting to make a left turn onto northbound 30th Street near O'Neal Parkway. She told police she thought she had enough time to safely make the turn, but Gurney — traveling southbound on 30th Street — did not have time to stop.

Witnesses on scene attempted CPR, but Gurney was declared dead at Boulder Community Hospital. Investigators say he was wearing a helmet.

The driver of the SUV, whose name was not released, was not injured. The accident is still under investigation, and no citations have been issued at this time, according to Kim Kobel, a spokeswoman with the Boulder Police Department.

An autopsy for Gurney has been completed, and Boulder County Coroner Emma Hall will determine the official cause and manner of death.